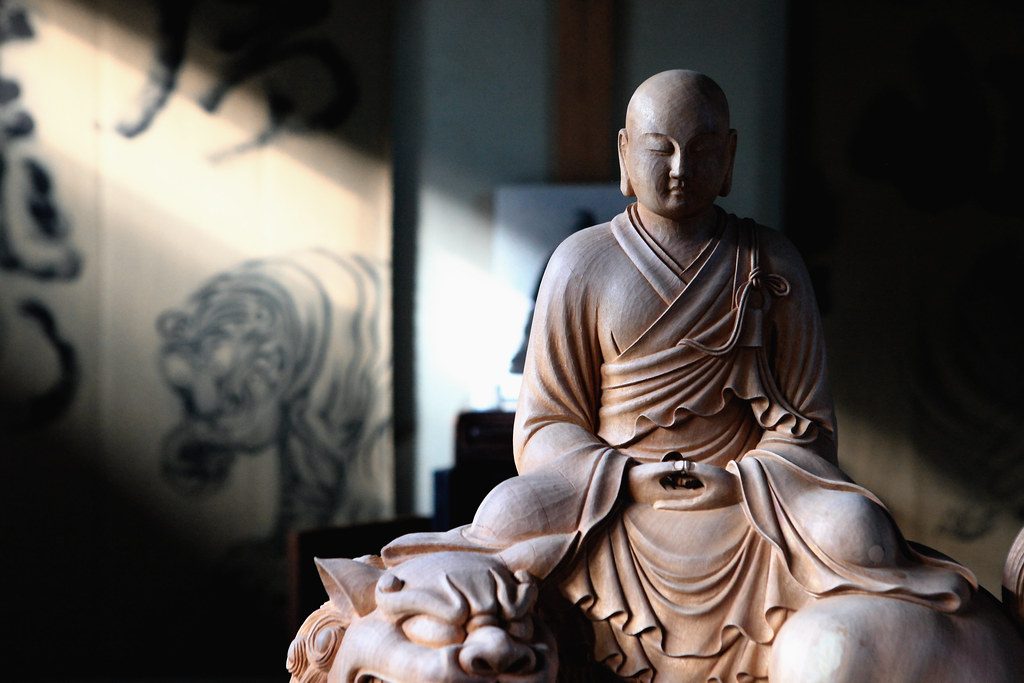 The Origins of Zen Buddhism:

Zen Buddhism is one of the world’s oldest religions, which originally had its roots within the Hindu culture in India. According to tradition, Buddha was born at Lumbini, near the present-day border of India and Nepal in 563BC. He was born Prince Siddhartha Gautama. At the age of twenty-nine Siddhartha left his royal family in search of spiritual truth and the cause of human suffering.

After six years of searching, he resolved to sit in silent meditation under a Pippala tree (usually referred to as a Bodhi tree) until he achieved enlightenment. This took place at Bodh Gaya southeast of the ancient Indian city of Varanasi (Benaras). After forty-nine days of meditation, he attained enlightenment, after which he traveled to Sarnarth, a short distance north of Varanasi, to preach his first sermon.

The name Buddha means awakened or enlightened one. When the Buddha died he attained nirvana or a final release from human suffering.

Although Buddha did not write down his dharma or teachings, later followers who lived around the modern-day Indian state of Bihar transcribed his teachings and spread them through Northern India. Zen Buddhism developed rapidly, especially when it was embraced by the powerful emperor Ashoka in 262BC. Eventually, it spread to other Asian countries and, in more modern times, too many parts of the western world.

The Buddha taught that life involves suffering but that suffering comes from our sensual desires and the illusion that they are important. By following the middle way – moderation in everything – and what became known as the noble eightfold path these desires can be extinguished and a state of nirvana eventually reached. In most cases, this process involves going through a series of rebirths or reincarnations until the ultimate goal is reached. The path that leads through this cycle is determined by karma – a law of cause and effect. Good and bad actions in one life determine roles to be played in the next life and so on. A similar belief in karma and reincarnation is common in Hinduism. The later teachings of Zen proposed that it was possible to attain nirvana, like the Buddha himself, in a single lifetime.

The Origins of Zen Buddhism:

Zen is a school of Buddhism that emphasizes the practice of meditation as the key ingredient to awakening ones inner nature, compassion, and wisdom. The practice of meditation (Zen in Japanese) as a means of attaining enlightenment was introduced, as we have seen, by the Buddha himself. Zen approached Buddhism in the most direct, simple, and practical way. It grasped that enlightenment was the most fundamental aspect of Buddhism and thus did away with sacred scriptures, rituals, and objects of worship, all of which had become a major aspect of Mahayana Buddhism in India.

This more direct approach was introduced into China in the sixth century by the traveling Indian monk Bodhidarma. It was introduced into Japan a century later. In this new method (or no method) approach spiritual truth was to be transmitted not by words but by spiritual enlightenment. To this end, Zen masters used (as well as meditation) question and answer riddles are known as koans to trigger rapid enlightenment in their students by shocking them out of their conventional ways of logical thinking. One well-known koan is to contemplate the sound of one hand clapping. In addition, they also used Zen poetry, painting, and calligraphy as vehicles to enlightenment or as fingers pointing to the moon.

Zen Buddhism flourished as a dynamic intellectual force during the Tang dynasty (618-906 A. D.) in China. The philosophy of Zen Buddhism was embraced by Chinese scholars – officials, poets, and scholar-amateur painters. Scholar-amateur and monk painters executed highly original, spontaneous, and abbreviated ink paintings.

The artist Dong used Zen concepts to distinguish between ‘art’ ( Southern school) and ‘craft’ ( Northern School). Like Zen, art cannot be precisely defined. Like a Zen awakening, the artist creates with originality from within. ‘Art’, it was thought, was not measured by achievement in the gradual mastery of technical skills and conventions. These were associated with ‘craft’. Thus in the Mountain Landscape, Dong has created a highly original and revolutionary work. The austere, solitary, semi-abstract landscape does not so much represent an actual place as express the artist’s inner spiritual world. In this inner landscape, the human figure, a reminder of the banal and dusty world, is excluded. It is refreshing in its strength, intensity, and apparent child-like awkwardness.

Zen Buddhism reached Japan in the 7th century but was not firmly established until the 12th century. Zen Buddhism permeated the aesthetic sensibilities of everyday life in Japan, in particular the simple act of drinking tea. Towards the end of the 12th century, powdered green tea was brought back to Japan from China by returning Zen Buddhist monks, who drank tea to stay awake during long hours of meditation. The spirit and etiquette of serving tea were transformed into the art of the ‘tea ceremony’ ( cha-no-yu, hot water for tea) first performed by Zen monks for the military class in the 15th century.

In the 16th century, the tea masters, whose practice was informed by Zen, became arbiters of aesthetic taste. They began to use local rustic wares, such as Shigaraki ware, selected for its natural beauty. The rough and dynamic Shigaraki jar, originally made to store grain, was adopted as a container for tea leaves. The aesthetic taste and spiritual perception of the beauty of the tea masters have extended to the familiar and commonplace, including objects of humble origin. The Japanese love of nature includes the appreciation for natural textures and rough accidental effects.

A flaw or apparent imperfection is appreciated as Wabi or the beauty of poverty.

The Beauty of Poverty:

The concept of the beauty of poverty is relevant to the appreciation of this unique paper robe (kamiko) which is made of paper and lined with silk, worn by men and women of all classes during the Edo period (1615-1868). Paper was used for garments in Japan from about a thousand years ago. The poor, who could not afford silk or cotton, used paper as a cheap material for clothing. Paper clothing was not durable. When worn, it could be easily damaged and torn and would disintegrate if washed. Buddhist monks adopted paper garments of the poor, associating it with ‘holy poverty’. Copying the monks, other members of society from samurai and nobility to wandering poets and tea masters adopted paper clothing, which had come to symbolize a life of detached simplicity, humility, and vulnerability.