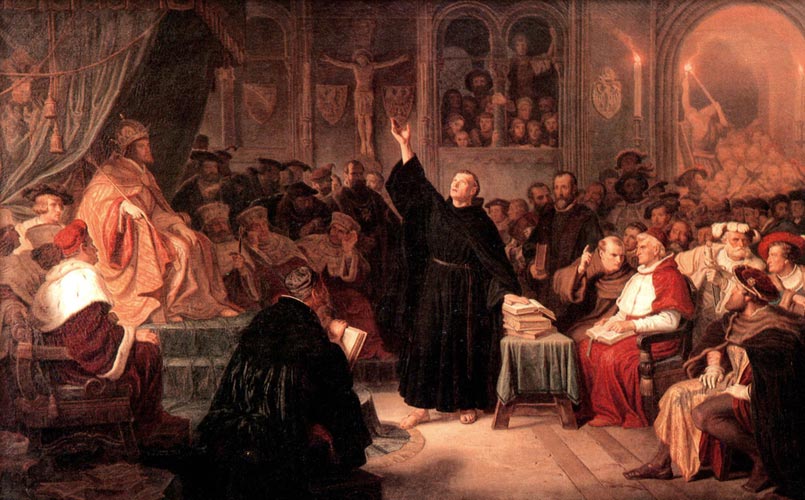 Protestant Religion around the world

Protestantism, Or protestant religion a Christian religious movement that began in northern Europe in the early 16th century as a reaction to medieval Roman Catholic doctrines and practices. Along with Roman Catholicism and Eastern Orthodoxy, Protestantism became one of three major forces in Christianity. After a series of European religious wars in the 16th and 17th centuries, and especially in the 19th century, it spread throughout the world. Wherever Protestantism gained a foothold, it influenced the social, economic, political, and cultural life of the area.

The name Protestant first appeared at the Diet of Speyer in 1529, when the Roman Catholic emperor of Germany, Charles V, rescinded the provision of the Diet of Speyer in 1526 that had allowed each ruler to choose whether to administer the Edict of Worms (which banned Martin Luther’s writings and declared him a heretic and an enemy of the state). On April 19, 1529, a protest against this decision was read on behalf of 14 free cities of Germany and six Lutheran princes who declared that the majority decision did not bind them because they were not a party to it and that if forced to choose between obedience to God and obedience to Caesar, they must choose obedience to God. They appealed either to a general council of all Christendom or to a synod of the whole German nation. Those who made this protest became known to their opponents as Protestants, and gradually the label was applied to all who adhered to the tenets of the Reformation, especially to those living outside Germany. In Germany, the adherents of the Reformation preferred the name evangelicals, and in France Huguenots. The name was attached not only to the disciples of Martin Luther (c. 1483–1546) but also to the Swiss disciples of Huldrych Zwingli (1484–1531) and later of John Calvin (1509–64). The Swiss reformers and their followers in Holland, England, and Scotland, especially after the 17th century, preferred the name Reformed.

In the 16th century, Protestant Religion or Protestants referred primarily to the two great schools of thought that arose in the Reformation, the Lutheran, and the Reformed. In England in the early 17th century, the word was used to denote “orthodox” Protestants as opposed to those who were regarded by Anglicans as unorthodox, such as the Baptists or the Quakers. Roman Catholics, however, used it for all who claimed to be Christian but opposed Catholicism (except the Eastern churches). They, therefore, included Baptists, Quakers, and Catholic-minded Anglicans under the term. Before the year 1700, this broad usage was accepted, though the word was not yet applied to Unitarians. The English Toleration Act of 1689 was titled “an Act for exempting their Majesties’ Protestant subjects dissenting from the Church of England.” But the act provided only for the toleration of the opinions known in England as “orthodox dissent” and conceded nothing to Unitarians. Throughout the 18th century, the word Protestant was still defined about the 16th-century Reformation.

Protestant Religion | Protestantism around the world:

Protestantism or Protestant Religion comprises a great variety of churches belonging to five main groups. Most have joined a Churches’ Ecumenical Council trying to present a united message.

in Protestant Religion Lutheranism goes back to the origins of the Reform and professes the three central claims of Luther’s message :
• absolute authority of the Bible
• salvation by grace (and its corollary, justification by faith)
• universal priesthood of believers.
Lutheran theology is based on the story of the cross: humanity meets God himself in the distress of the crucified Christ, who willingly experienced the depths of human misery. From then on, human beings are “both sinners and justified”. Changed by his meeting with God, liberated from his anguish of loneliness and his despair, man can open his heart to his fellow human beings and consecrate his life to serving them. Even when it refers to “both spheres” (temporal and spiritual) Lutheran theology emphasizes history and the world as places where God urges men to play a role.
United in the worldwide Lutheran Federation, Lutheran Churches are in ecclesial communion with each other. But there are still differences between them, for instance in Scandinavia they have an Episcopalian structure, maintaining some sort of ecclesiastical hierarchy. In France, as in a few other countries, they have adopted a Presbyterian-synodal system, while others chose an intermediate system between these two models.

Reformed churches profess to follow Luther, but also to follow Jean Calvin, Ulrich Zwingli, or Theodore de Bèze. The Reform theology particularly stresses God’s omnipotence. It does not limit the Christians’ freedom or responsibility, but on the contrary, having received in Jesus-Christ the assurance of salvation and being pardoned, they should feel all the freer to lead very demanding and responsible lives. They should combine a search for God and engagement with society to fight injustice in this world. God’s transcendence involves putting all human powers in perspective, be they religious or political.
Most Reformed Churches belong to the worldwide Reformed Alliance. They do not subscribe to a single confession of faith; each church proclaims its faith within its specific context and story. The differences are accepted and protected to ensure the theological pluralism of the Reformed Church.
Reformed Churches are generally organized on the Presbyterian-synodal system, councils of the laity in local churches, and regular synodal meetings.
Since 1973, after theological agreement in the “Concorde de Leuenberg”, European Reformed and Lutheran Christians share full ecclesial communion.

Evangelical churches originated from various 16th-century Reformed movements, especially Anabaptists.
On the whole, these Churches only accept as members those who declare their faith in Jesus Christ and, in asking to be baptized, knowingly choose to repent and declare their faith. That is why Evangelical Churches refuse to baptize young children. They are a Church demanding individual profession of faith, and different from multitudinous in that respect. In addition, the Evangelicals profess to follow the great Reformed principles, particularly salvation through grace received by faith and “sola scriptura”, i.e. words inspired by God, the Scriptures are the unique and sufficient authority in theological matters.
Since its beginning, the Evangelical Church has strongly affirmed the principle of the separation of Church and State. As much importance is given to evangelization as to social action; thus each church is called to find opportunities for witness and service appropriate for a diaconal ministry.
Evangelical Churches can be organized following various principles, (Congregationalist, Presbyterian-synodal, etc.)

Anglicanism dates back to the 16th century and claims to be the middle way between the Catholic faith and the Reformed faith. The liturgy was established in 1549 in the Book of Common Prayer and the doctrine in The 39 articles (1571) and the Lambeth Quadrangle (1888).
The Church of England is a State Church, the sovereign is its Supreme Governor and Parliament may veto measures taken by the Synod. But gradually the church is distancing itself from the State.
Anglican churches are organized according to the Episcopalian model and believe in Apostolic Succession.
Anglicanism spread all over the world, especially to the former British possessions. The Anglican Communion comprises all the Anglican Churches, under the Archbishop of Canterbury. Each Church has its own governing body. All the bishops meet every ten years at the Lambeth Conference. In addition, the archbishops, who preside over each Church, regularly hold meetings, called the Primates Committee, to discuss and argue about problems they have met in their churches.

in Protestant Religion, The Pentecostal Movement began in Revival movements which appeared at the beginning of the 20th century, in the United States (encouraged by pastors Charles Parham and William Seymour), in India, and Wales (under the influence of Evan Roberts). The first worshippers wanted to return to the origins of the Primitive Church and to relive experiences of apostolic times, particularly the day of Pentecost when tongues of flame came to rest on the disciples and they began to speak in tongues (Acts, chapter 2).

The theological distinctiveness of the Pentecostal Movement is that besides the presence of the Holy Spirit in the believer because he has been born again, a new power is acquired through the experience called baptism in the Holy Spirit. This confers on the believer the gift of speaking in tongues, prophesy, or the gift of healing. These gifts from the Spirit, also called charismas, are listed in the First Epistle of Paul to the Corinthians.
in Protestant Religion, Pentecostal Churches testify to “the Foursquare Gospel”, i.e. Jesus saves, baptizes, heals, and will come again. But they also belong to the Protestant Evangelical and Baptist tradition and thus look to the main Reformed principles, namely salvation through grace, the absolute authority of the Bible, a universal priesthood.
At the ecclesiological level, Pentecostal churches are often Congregationalist, but some adhere to the Presbyterian-synodal system or the opposite Episcopal system.

The Ecumenical Council of Churches:

The origin of the modern ecumenical movement goes back to the end of the 19th and beginning of the 20th century. Indeed, Christians then started praying and working together, ignoring denominational differences. From the late 1920s, trailblazing movements were organized to promote the worldwide unity of the church.
That is why, in 1937, Church leaders decided to create an Ecumenical Council of Churches. But World War II broke out and the official founding of the Council was delayed until August 1948. Representatives of 147 Churches took part in the first Assembly, held in Amsterdam.
Since then a growing number of Churches all over the world have united in the quest for Christian unity. They build bridges over old differences. Among its members are almost all Orthodox Churches, many long-standing Protestant Churches which have grown up since the Reformation, such as Anglican, Baptist, Lutheran, Reformed Methodist, and a wide variety of Independent and United Churches.
The largest Christian Church in the world – the Roman Catholic Church – is not a member of the Ecumenical Council, but has collaborated closely with it for more than thirty years and has always sent representatives to the main Council meetings, and sessions, and assemblies of its Central Committee. The Pontifical Council for Promoting Christian Unity appoints twelve representatives to the Ecumenical Council’s “faith and constitution” committee and works with it on preparing material for the Worldwide Week of Prayer for Christian Unity that is sent to all parishes.
The Ecumenical Council does not intend to create a worldwide Super-Church, nor to standardize worship practices. But its goal is to search what deeply unites Churches and Christian communities so that each can find in another the authentic expression of “one holy, catholic and apostolic church.” It then becomes possible to confess faith together, to work together on mission and service to others, and even sometimes to partake in the same Lord’s Supper. All these joint actions cement the basis of the Ecumenical Council which proclaims that our Lord Jesus-Christ is “God and Saviour according to the Scriptures.”