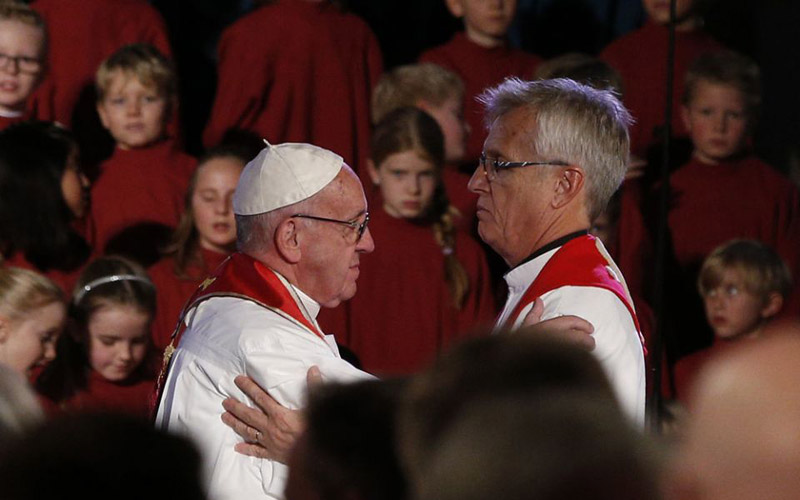 Catholic And Protestant are two different branches of Christianity, just like Shia and Sunni are sects of Islam. While the Pope is the head of the Catholic Church, Protestant is a general term that refers to Christianity that is not subject to papal authority.

Protestantism is a form of Christianity that originated with the 16th-century Reformation, a movement against what its followers perceived to be errors in the Catholic Church. Protestants originating in the Reformation reject the Roman Catholic doctrine of papal supremacy but disagree among themselves regarding the number of sacraments, the real presence of Christ in the Eucharist, and matters of ecclesiastical polity and apostolic succession. They emphasize the priesthood of all believers; justification by faith alone (sola fide) rather than by faith with good works; the teaching that salvation comes by divine grace or “unmerited favor” only, not as something merited (sola gratia); and either affirm the Bible as being the sole highest authority (sola scriptura “scripture alone”) or primary authority (prima Scriptura “scripture first”) for Christian doctrine, rather than being on parity with sacred tradition. The five sola of Lutheran and Reformed Christianity summarise basic theological differences in opposition to the Catholic Church

The Catholic Church, also known as the Roman Catholic Church, is the largest Christian church and the largest religious denomination, with approximately 1.3 billion baptized Catholics worldwide as of 2019. As the world’s oldest and largest continuously functioning international institution, it has played a prominent role in the history and development of Western civilization. The core beliefs of Catholicism are found in the Nicene Creed. The Catholic Church teaches that it is the one, holy, catholic and apostolic church founded by Jesus Christ in his Great Commission, that its bishops are the successors of Christ’s apostles, and that the pope is the successor to Saint Peter, upon whom primacy was conferred by Jesus Christ. It maintains that it practices the original Christian faith taught by the apostles, preserving the faith infallibly through scripture and sacred tradition as authentically interpreted through the Magisterium of the church. The Latin Church, the twenty-three Eastern Catholic Churches, and institutes such as mendicant orders, enclosed monastic orders, and third orders reflect a variety of theological and spiritual emphases in the church.

Some Differences Between Catholic and Protestant:

The differences between Catholic and Protestant can be profound at times. None would argue that Christianity is a major monotheistic world religion. Yet, the divisions within the ranks of Christendom are well documented. However, all of its adherents believe in its central figure, Jesus, the Christ, who lived a sinless life and died on a cross to redeem mankind. He was resurrected on the third day and ascended to God in heaven and will come again to judge the living and the dead, as the Scriptures teach. Taking a quick look at the main thing Protestants and Catholics both believe in makes it hard to understand the differences between Catholics and Protestants, but it’s a good starting point for understanding.

It is a well-known fact that what separates Christianity from most other religions is the person of Christ, and most notably, his physical resurrection from the dead. John 20:1-20 recounts the story and details several key facts. First, both Mary of Magdalene, Peter, and another primary disciple did not understand the significance of the resurrection at first, though they believed it to be true. “For they did not yet understand the scripture that he had to rise from the dead.” (NAB John 20:9)

Second, angels attended his resurrection as is plain from John 20:11-13. Third, Jesus appeared physically to Mary and told her he was going to heaven, to God. Next, that same night, he appeared physically to his disciples. (NAB John 20:15:20) Each of these items is significant and stresses the importance of his resurrection. Later, the Apostle Paul, under the inspiration of the Holy Spirit penned the truths surrounding the significance of Christ’s resurrection.

Yet, despite the overwhelming agreement of the main articles of the faith, like the resurrection, it seems that there exist so many distinct families of Christian denominations. This is due to one main reason. Firstly, as with any religion, man is involved in defining and shaping the religion. From its inception, the religion was simple, with Christ, himself as its main promoter. Actually, according to the Biblical record, Christ and his early disciples never promoted Christianity. A quick search will show that the term is never used in the Synoptic Gospels, and appears a mere three times in the entire Christian New Testament (twice with a negative connotation). What is used about sixty times in the New Testament are the terms ‘disciple’ or ‘disciples’ when referring to believers. Early Christians simply followed Christ.

That being said, as more and more believers joined the fold and more and more leaders emerged, new ideas and interpretations evolved. Each denomination has its characteristics and merits and can be best evaluated against the main source text for Christianity, the Bible. Literal wars have been fought over such issues of interpretations and ideas. Some would say these were (are) mere power struggles between fallen men trying their best to sincerely please and represent God.

Some would argue that the Book is enough and trumps traditions. Yes, this can get messy and organic, but it seems it’s closer to what God had in mind. In the absence of clear, definitive guidelines for how to do Christianity, what we are left with is the Bible. As with most theoretical approaches to things, this is easier said than done. Man’s egos always enter in and ultimately, believers agree to disagree on issues. As men part ways, new branches on the Christian vine sprout out, and new denominations are formed and fortified. This often incongruent bunch of believers and their propensity to disagree for the sake of disagreement at the expense of actually studying and proving things out, issue by issue, has troubled me to a minor degree.

Consider three major differences between Catholic and Protestant. The subjects of infant baptism, adult baptism, communion, and the doctrine of transubstantiation, and clergy present diverging views for each camp. Catholics practice infant baptism by sprinkling and not immersion; believe in the doctrine of transubstantiation, that is, the body and blood of Christ becoming the real presence of Christ during communion; do not allow clergy to marry.

Protestants, conversely, only practice adult baptism by immersion in water; believe communion is symbolic of Christ’s covenant with the church and don’t believe in the doctrine of transubstantiation; allow clergy to be married (as the Apostle Peter, the alleged first Pope was). With this small sampling of the differences between Catholics and Protestants, how does one know who is correct? What Catholics believe can be drastically different than what Protestants believe. The Catholic tradition is founded largely in church traditions, while the Protestants’ are more prone to cite Bible texts as their authority. How shall we judge?

Again, the fact that there are so many different denominations within most religions and especially in Christianity is indicative of the problem inherent in religion. Namely, man has a part in it. Problems attended the early ecumenical council in Nicaea and throughout the history of the faith. The problem is that even the best of us are imperfect, fatally flawed individuals. When we enter the waters of the sacred (the spiritual) we muddy those pure waters. What results is religion? ‘Holy water’, yet muddied at the same time. Will the differences between Catholics and Protestants ever go away? This is unlikely.

One must note as well, during more modern times, the religious freedom that is so fundamental and valued in America has aided denominationalism within Christianity. This newfound religious freedom and tolerance have fostered many of the major and minor denominations that we see in existence today. Many other denominations have been grafted into the main roots of Christianity over the years. This isn’t always bad, but neither is it always good. Some of the differences between Catholic and Protestant are less significant than others. Others, however, have sparked wars.

What are The Fruits of Holy Spirit and their meanings in bible?