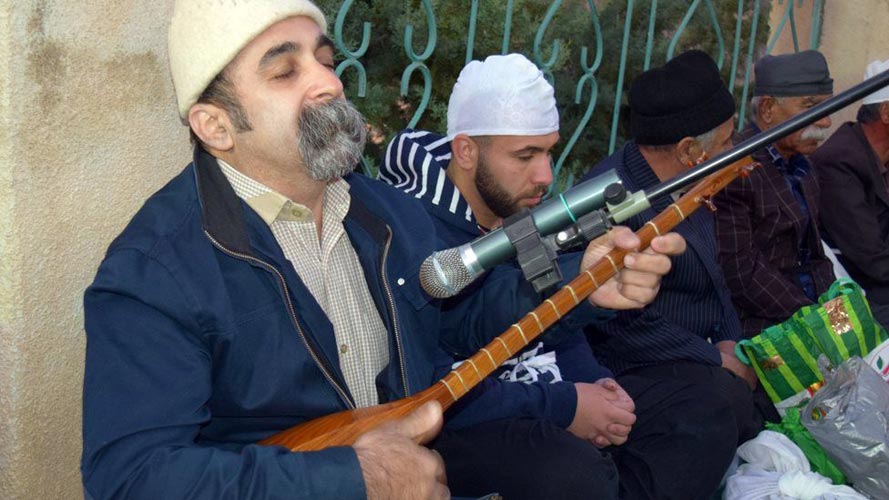 What is the yarsani religion?

The Yarsani Religion, Ahle Haqq or Kaka’i (Kurdish: یارسان‎, Yarsan, Persian: أهل حق‎; “People of Truth”), is a syncretic religion founded by Sultan Sahak in the late 14th century in western Iran. The total number of Yarsanis is estimated at around 2,000,000 or 3,000,000. They are primarily found in western Iran and eastern Iraq and are mostly ethnic Goran Kurds, though there are also smaller groups of Turk, Persian, Luri, Azerbaijani and Arab adherents. Some Yarsanis in Iraq are called Kaka’i. Yarsanis say that some people call them disparagingly as “Ali-o-Allahi” or “worshipers of Ali” which labels Yarsanis deny. Many Yarsanis hide their religion due to the pressure of Iran’s Islamic system, and there are no exact statistics of their population.

Yarsani Religion aka Kaka’i or Ahl-e Haqq is a Kurdish religious system founded in the 14th century between the border of the KRG (near Halabja) and Iranian-occupied Kurdistan (mostly around Kermanshah), and more recently also in the Diaspora in Western countries. All adherents of Yarsanism are Kurds. The term Ahl-e Haqq is also used by Islamic sects such as the Hurufites.

In addition to the Shiia facets, the religion of Yarsanism reveals, above all, clear elements of Yezidism and Alevism. The number of members is estimated to be one million. The main sanctuaries of Ahl-e Haqq are the tomb of Baba Yadgar in Dahab and the tomb of Sultan Sahak in Perdiwar.

The religious literature of the Ahl-e Haqq with the principal Kalam-e Saranjam is mainly written on Gorani (Hawrami and Leki), most of which are Ahl-e Haqq. The Ahl-e Haqq regard themselves mostly as Gûran (Goran), regardless of the dialect they speak.

The Yarsanis have distinct religious literature primarily written in the Gorani language. However, few modern Yarsani can read or write Gorani (a Northwestern Iranian language belonging to the branch Zaza-Gorani) as their mother tongues are Southern Kurdish and Sorani, which belong to the other two branches of the Kurdish languages. The speakers of Sarli living near Eski Kalak are adherents. Their central religious book is called the Kalâm-e Saranjâm, written in the 15th century based on the teachings of Sultan Sahak.

Yarsanism is barely mentioned in historical religious books as its doctrine and rituals are largely secret. The followers of Yarsanism perform their rituals and ceremonies in secret, but this has not relieved the harassment of many of the Yarsani by Islamic or other governments over the centuries. The followers of this religion say that after the Islamic Revolution in Iran, pressure on the Yarsani community has increased and they have been deprived and discriminated against for over 30 years. One of the signs of Yarsanic males is the mustache, as the Yarsanic holy book Kalâm-e Saranjâm says that every man must have a mustache to take part in Yarsanic religious rites.

The Yarsani believe the Sun and fire are holy things and follow the principles of equalization, purity, righteousness, and oneness, which leads some researchers to find Mithraic roots in this religion.

Yarsanis believe in seven consecutive incarnations of divinity as well as in succession five epiphanies of divine hypostases or angels. These were developed from the divine and formed their own essence. From Sufism (Islamic mysticism), they took over the practice of Dhikr at Cem ceremonies as well as sharing communal meals and fraternal cohabitation. Cem is understood as a mystical union, while a group of singers (kelamxwen), who performs religious verses, is sitting opposite an orchestra of several players of the tembûr. Tembûr (or temîre) is a tanbur-like Kurdish Long-necked lute, a sacred meaning in the Ahl-e Haqq. Of the seven steps, four were already traversed, and the divine essence was thus shown as a form of the Creator God in Kavandagar, Mortaza Ali, Shah Hoshin, and Sultan Sahak, with Sultan Sahak revealing absolute truth.

Salvation through God is reserved only to certain people, depending on which clay they were created from. Thus, people like the Ahl-e Haqq of yellow clay (Zarda-gel) find salvation, while humans of black clay (Kāk-e siyah) are forever condemned.

Among the first scientific descriptions of the Ahl-e Haqq are the work of the Russian Orientalist and diplomat Vladimir Minorsky from 1920.

Yarsani Religion, Kakais, or Ahl-e Haqq are settled in different pockets in Kurdistan.

Most of the Kakais live in Iranian-occupied Kurdistan, specifically in Kirmanshah and Ilam Provinces. As a result of the oppression and assimilation policies of the Islamic regime, the Yarsani community is declining. Many Yarsanis leave eastern Kurdistan for Europe or KRG.

There is a significant Kakai community in Southern Kurdistan. Daquq district of Kirkuk is the central settlement of Kakais. In this area, many Kakai-Kurds were displaced to make room for Arab settlers. Plus, dozens of villages were ruined. Since 2003, the Kakai community has been working to re-establish themselves in their areas.

There are several Kakai Kurdish villages in the south-eastern Ninawa Plain. In addition, Shabaks who consist of the majority of Ninawa Plain are sometimes identified as Yarsanis, Kakais.