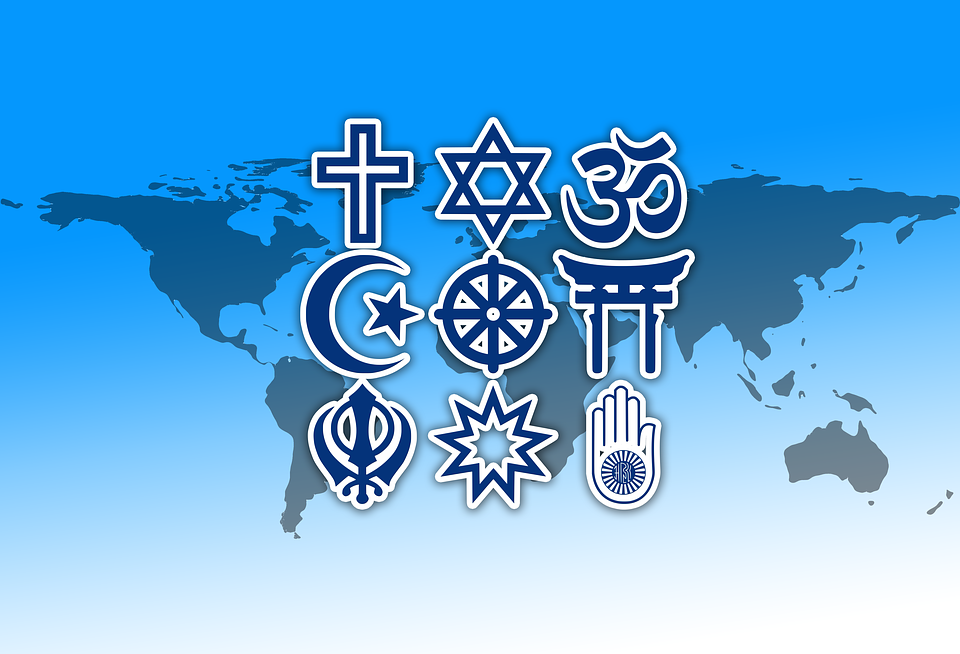 Researchers estimate the number of religions in the world is M.Ten thousand independent religion, but a few of them are prevalent around the world, and this article will talk about the oldest religion in the world.

we call the term religion, in general on a set of beliefs and ideas linked to each other and explains for its adherents the purpose of the existence of the universe and life and defines the relationship of humans to this universe. Religion is also defined as a set of beliefs and ideas related to metaphysics and is closely related to morals, and is distinguished by Religion from personal beliefs is general among humans; and religious rituals usually include speeches, sermons; ceremonies, sacrifices, festivals, festivals, marriage services, funerals, meditation, music, dance, art, and many others depending on the cultures of peoples and nations.

The earliest evidence of religious beliefs dates back hundreds of thousands of years, especially in the Middle and Lower Stone Age:

Cathaloyuk is believed to have been the spiritual center of central Anatolia. The most important feature of Cathaloyuk was her female status. Although the male deity is also present; “the female deities’ statues are much more than the male deity, who moreover did not appear as a representative until after the sixth stage”

Throughout history, eighteen stages have been distinguished. These elaborate statues were first found in places believed to be shrines. However; a statue of one of the majestic male deities was found sitting on his throne and surrounded by two female lions in a cereal box and it was concluded that this statue may have been a way to ensure harvest or to protect the food supply.

The oldest religion in the world:

Hindu religion is the oldest religion in the world is still its rituals practiced until the present time. which is also called Brahman religion, and spread in India and Nepal, and followers of the Hindu religion more than a billion people.

It is one of the largest religions on the face of the earth after Christianity, Islam, and Buddhism; and Hindus in India constitute almost 96% of all Hindus around the world; the oldest religion in the world dates back to the fifteenth century BC, which is a group of beliefs, spiritual rituals, and pagan traditions that formed and developed over long centuries from the moment they formed, and in them also a great mixture of diverse philosophies, cultures, and beliefs that fused over time.
a problem One of the largest religions whose pillars revolve around holiness, the afterlife, and the worldly life. It invites people to come closer, collaborate, and understand to achieve the good of all human beings.

The founder of the oldest religion in the world:

Hinduism is the oldest religion in the world. Where it was founded more than 3500 years ago, fifteen centuries BC; and in those times the era of writing and blogging had not started.

which is what is called pre-historical times.

We believed Aryan displaced people who migrated From Europe and they came to India in those times.

They had brought with them a mixture of Greek and Norwegian myths and put them in India and that step was the beginning of the oldest religion in the world.

That was based on the beliefs and ideas of the Aryan displaced people themselves. some believe that the Hindu religion is one of the heavenly religions that God Almighty sent it down to a Prophet in India, but it has been corrupted with time, but this statement has no evidence to base on it.

They established the religions of the world in the modern era throughout Eurasia during the Middle Ages through Christianity in the Western world, Buddhist missions in East Asia, Buddhist descent in the Indian subcontinent; and the spread of Islam throughout the Middle East, Central Asia, North Africa and parts From Europe and India.

Many religious movements in the Middle Ages confirmed the concept of spirituality; such as the Katherians and the movements related to them in the West; the Paket movement in India and Sufism in Islam. The monotheism of the deities reached distinct forms in Christian Christology and Islamic monotheism. Hindu monotheistic Brahman ideas of the same style have reached their traditional form thanks to the instructions of Adi Shankara.

9 thoughts on “Oldest religion in the world”