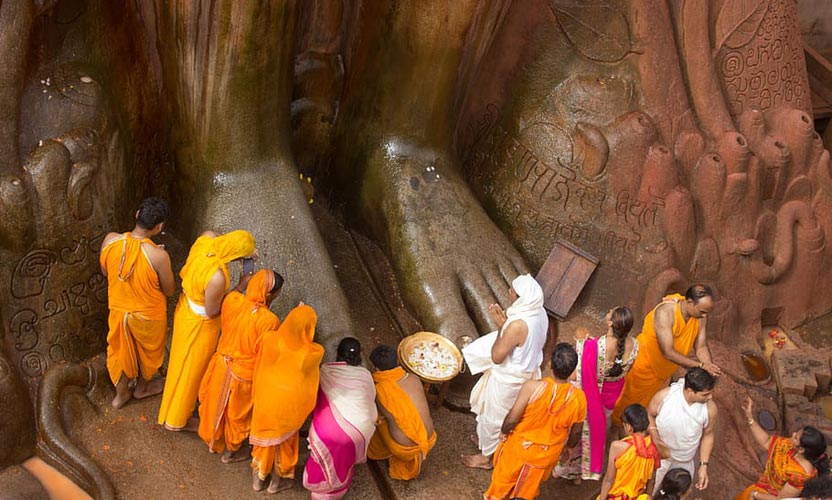 What are the major beliefs and philosophy of Jainism?

Jainism religion or Jainism beliefs, one of the three religions developed in India, practices asceticism and a strict non-violence to all living things called Ahimsa as part of their life-long attempt to purify the soul of Karma and free themselves from the ongoing cycle of death and rebirth through reincarnation.

Jainism is transtheistic and forecasts that the universe evolves without violating the law of substance dualism, auto executed through the middle ground between the principles of parallelism and interactionism.

Jainism is a transtheistic religion, holding that the universe was not created, and will exist forever. It is believed to be independent, having no creator, governor, judge, or destroyer. In this, it is unlike the Abrahamic religions, but similar to Buddhism.

However, Jainism believes in the world of gods and hell beings who are born, die, and reborn like earthly beings. Jain texts maintain that souls who live happily in the body of a god do so because of their positive karma. It is further stated that they possess a more transcendent knowledge about material things and can anticipate events in the human realms.

Jain texts propound that the universe consists of many eternal lokas (realms of existence). As in Buddhism and Hinduism, both time and the universe are eternal, but the universe is transient.

The universe, body, matter, and time are considered separate from the soul (jiva). Their interaction explains life, living, death, and rebirth in Jain philosophy.

The Jain cosmic universe has three parts, the upper, middle, and lower worlds (urdhva Loka, Madhya Loka, and adho loka). Jainism states that Kāla (time) is without beginning and eternal; the cosmic wheel of time, kālachakra, rotates ceaselessly. In this part of the universe, it explains, there are six periods of time within two eons (ara), and in the first eon the universe generates, and in the next, it degenerates.

It states that the world is currently in the fifth ara of avasarpiṇī, full of sorrow and religious decline, where the height of living beings shrinks. According to Jainism, after the sixth ara, the universe will be reawakened in a new cycle.

According to Jainism beliefs and philosophy, the existence of an “abound and ever-changing soul” is a self-evident truth, an axiom that does not need to be proven.

It maintains that there are numerous souls, but every one of them has three qualities (Guṇa): consciousness (Caitanya, the most important), bliss (sukha), and vibrational energy (virya).

It further claims that the vibration draws karmic particles to the soul and creates bondages, but is also what adds merit or demerit to the soul. Jain texts state that souls exist as “clothed with material bodies”, where it entirely fills up the body. Karma, as in other Indian religions, connotes in Jainism the universal cause and effect law.

However, it is envisioned as a material substance (subtle matter) that can bind to the soul, travel with the soul in bound form between rebirths, and affect the suffering and happiness experienced by the jiva in the lokas.

Karma is believed to obscure and obstruct the innate nature and striving of the soul, as well as its spiritual potential in the next rebirth.

The conceptual framework of the Saṃsāra doctrine differs between Jainism and other Indian religions. The soul (jiva) is accepted as a truth, as in Hinduism but not Buddhism.

The cycle of rebirths has a definite beginning and end in Jainism.

Jain theosophy asserts that each soul passes through 8,400,000 birth-situations as they circle through Saṃsāra, going through five types of bodies: earth bodies, water bodies, fire bodies, air bodies, and vegetable lives, constantly changing with all human and non-human activities from rainfall to breathing.

Harming any life form is a sin in Jainism, with negative karmic effects. Jainism states that souls begin in a primordial state, and either evolve to a higher state or regress if driven by their karma. It further clarifies that abhavya (incapable) souls can never attain moksha (liberation).

It explains that the abhavya state is entered after an intentional and shockingly evil act. Souls can be good or evil in Jainism, unlike the nondualism of some forms of Hinduism and Buddhism.

According to Jainism beliefs, a Siddha (liberated soul) has gone beyond Saṃsāra, is at the apex, is omniscient, and remains there eternally.

Dravya means substances or entities in Sanskrit. According to Jainism beliefs and philosophy, the universe is made up of six eternal substances: sentient beings or souls (jīva), non-sentient substance or matter (pudgala), the principle of motion (dharma), the principle of rest (adharma), space (ākāśa) and time (kāla). The latter five are united as the ajiva (the non-living).

Jain philosophers distinguish a substance from a body, or thing, by declaring the former a simple indestructible element, while the latter is a compound, made of one or more substances, which can be destroyed.

The true insight in Jainism beliefs and philosophy is considered as “faith in the tattvas”. The spiritual goal in Jainism is to reach moksha for ascetics, but for most Jain laypersons it is to accumulate good karma that leads to better rebirth and a step closer to liberation.

Jainism beliefs and philosophy accepts three reliable means of knowledge (pramana). It holds that correct knowledge is based on perception (pratyaksa), inference (anumana), and testimony (sabda or the word of scriptures).

These ideas are elaborated in Jain texts such as Tattvarthasūtra, Parvacanasara, Nandi, and Anuyogadvarini. Some Jain texts add analogy (upamana) as the fourth reliable means, in a manner similar to epistemological theories found in other Indian religions.

According to Jainism beliefs, purification of soul and liberation can be achieved through the path of three jewels: Samyak darśana (Correct View), meaning faith, acceptance of the truth of soul (jīva); Samyak jnana (Correct Knowledge), meaning undoubting knowledge of the tattvas; and Samyak Charitra (Correct Conduct), meaning behavior consistent with the Five vows.

3 thoughts on “Jainism beliefs | What are the major beliefs?”