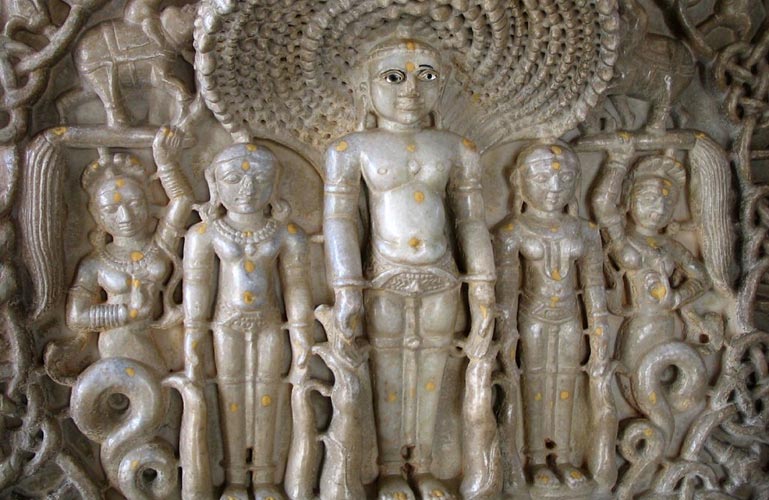 There are common questions part 1 on Jain religion and Jainism beliefs and Philosophy with answers From the Jain religion’s standpoint.

1- Who founded the Jain religion?

Jainism is somewhat similar to Buddhism, of which it was an important rival in India. It was founded by Vardhamana Jnatiputra or Nataputta Mahavira (599-527 BC), called Jina (Spiritual Conqueror), a contemporary of Buddha.

2- What does the Jain religion believe?

Jains believe that since the beginning of the time every living being (soul) because of its ignorance, is associated with karmas. The main purpose of the religion is to remove these karmas which are attached to the soul and become a liberated soul.

3- Does Jain believe in God?

Jains do not believe in a God or gods in the way that many other religions do, but they do believe in divine (or at least perfect) beings who are worthy of devotion.

4- Who is the God of Jain religion?

It’s Lord Mahavir, Lord Mahavir was the twenty-fourth and the last Tirthankara of the Jain religion. According to Jain philosophy, all Tirthankaras were born as human beings but they have attained a state of perfection or enlightenment through meditation and self-realization. They are the Gods of Jains.

The texts containing the teachings of Mahavira are called the Agamas and are the canonical literature – the scriptures – of Svetambara Jainism.

6- Which is the holy book of Jains?

It’s the Tirthankaras, Jains believe that Jainism is eternal dharma with the Tirthankaras guiding every cycle of the Jain cosmology. Their canonical religious texts are called Agamas and Paramagamas.

A Jain religion temple or Derasar is the place of worship for Jains, the followers of Jain religion. Jain architecture is essentially restricted to temples and monasteries, and secular Jain buildings generally reflect the prevailing style of the place and time they were built.

Jains worship the images of four and twenty Tirthankaras (lit. “ford-makers”) and Siddha (infinite liberated beings). In Jain religion, the purpose of prayer is to break the barriers of worldly attachments and desires and to assist in the liberation of the soul. Jains do not pray for any favors, material goods, or rewards.

9- Does the Jain religion believe in the soul?

Jains regard the soul as one of the six fundamental and eternal substances (dravyas) which forms the universe. The two states of soul substance are mentioned in the Jain texts. These are Svābhva (pure or natural) and Vibhāva (impure or unnatural state).

10- What do Jains believe happens after death?

Jain religious beliefs about the soul, For Jain’s body and soul are different things: the body is just an inanimate container, the conscious being is the jiva. After each bodily death, the jiva is reborn into a different body to live another life, until it achieves liberation

11- What do Jains celebrate?

12- What did Jains think about life?

Jains believe that life (which equals soul) is sacred regardless of faith, caste, race, or even species. Do not injure, abuse, oppress, enslave, insult, torment, torture, or kill any creature or living being.

13- Is Jain religion the most peaceful religion?

Jainism has long been respected as the world’s most peace-loving religion because of its strict doctrine of non-violence (ahimsa).

Most Jains are from the upper classes. There are about two million of them. Most live around Mumbai (formerly Bombay). The paradox in that they are essentially world-renouncing, but this has made them economically secure among the struggling masses of India.

Jains are the richest religious community, with more than 70% of their population in the top quintile. There isn’t much difference between Hindus and Muslims and they are very close to the national distribution of wealth.

16- What language do Jains speak?

Jainism is considered to be a legally distinct religion in India. A section of scholars earlier considered it as a Hindu sect or a Buddhist heresy, but it is one of the three ancient Indian religions.

Jainism is sometimes regarded as a transtheistic religion, though it can be atheistic or polytheistic based on the way one defines “God”.

Jains do not consume fermented foods (beer, wine, and other alcohol) to avoid the killing of a large number of microorganisms associated with the fermenting process. In Jain religion alcohol consumption of any kind is not allowed, neither are there any exceptions like occasional or social drinking.

Honey is forbidden, as its collection would amount to violence against the bees. Jains make considerable efforts not to injure plants in everyday life as far as possible.
Mushrooms, fungi, and yeasts are forbidden because they grow in unhygienic environments and may harbour other life forms.

Jains are strict vegetarians but also do not eat root vegetables and some types of fruits. Some Jains are also vegans and exclude various types of green vegetables during periods of the month.