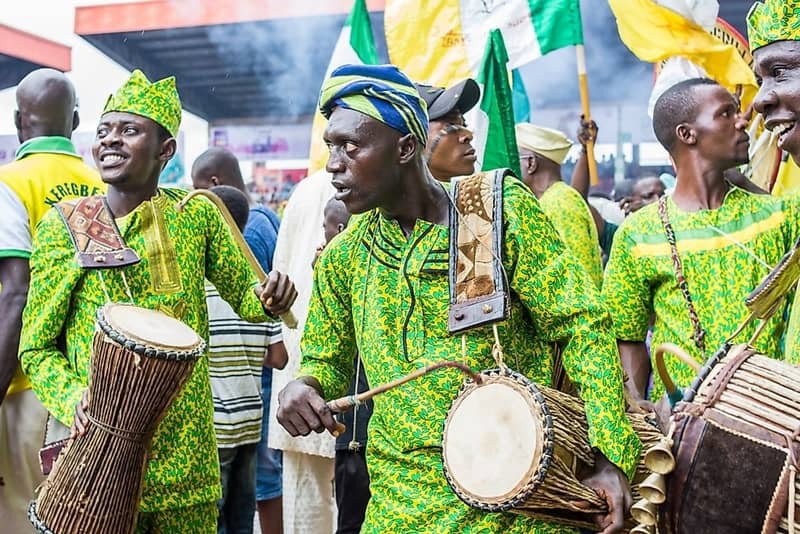 What Is The Yoruba Religion?

Yoruba Religion, one of the three largest ethnic groups of Nigeria, is concentrated in the southwestern part of that country. Much smaller, scattered groups live in Benin and northern Togo. The Yoruba numbered more than 20 million at the turn of the 21st century. They speak the language of the Benue-Congo branch of the Niger-Congo language family.

Many Yoruba are now Christians or Muslims, but aspects of their traditional religion survive. The traditional Yoruba religion has an elaborate hierarchy of deities, including a supreme creator and some 400 lesser gods and spirits, most of whom are associated with their cults and priests. The Yoruba language has an extensive literature of poetry, short stories, myths, and proverbs.

The Yoruba name for the Yoruba religion is Ìṣẹ̀ṣẹ, which also refers to the traditions and rituals that encompass Yorùbá culture. The term comes from a contraction of the words Ìṣẹ̀, meaning “source or origin,” and ìṣe, meaning “practice, or tradition,” coming together to mean “The source of our tradition,” as many of the practices, beliefs, traditions, and observances of the Yoruba originate from the religious worship of the orisa.

The Yoruba religion (Yoruba: Ìṣẹ̀ṣe), or Isese, comprises the traditional religious and spiritual concepts and practices of the Yoruba people. Its homeland is in present-day Southwestern Nigeria, which comprises Oyo, Ogun, Osun, Ondo, Ekiti, and Kwara as well as the Lagos States, parts of Kogi state, and the adjoining parts of Benin and Togo, commonly known as Yoruba land. It shares some parallels with the Vodun practiced by the neighboring Fon and Ewe peoples to the west and the religion of the Edo people to the east.

Yoruba religion is the basis for several religions in the New World, notably Santería, Umbanda, Trinidad Orisha, Haitian Vodou, and Candomblé. Yoruba religious beliefs are part of Itàn (history), the total complex of songs, histories, stories, and other cultural concepts which make up the Yoruba society

According to Kola Abimbola, the Yorubas have evolved a robust cosmology. In brief, it holds that all human beings possess what is known as “Àyànmọ́”, which is regarded as destiny or fate. Every person is expected to become eventually one in spirit with Olodumare (also known as Olorun, the divine creator, and source of all energy). Furthermore, the thoughts and actions of each person in Ayé (the physical realm) interact with all other living things, including the Earth itself.

The anthropologist Robert Voeks described Yoruba religion as being animistic, noting that it was “firmly attached to place”.

Each person living on earth attempts to achieve perfection and find their destiny in Orun-Rere (the spiritual realm of those who do good and beneficial things).

One’s ori-inu (spiritual consciousness in the physical realm) must grow in order to consummate union with one’s “Iponri” (Ori Orun, spiritual self)

Iwapẹlẹ (or well-balanced) meditative recitation and sincere veneration are sufficient to strengthen the ori-inu of most people. Well-balanced people, it is believed, can make positive use of the simplest form of connection between their Oris and the omnipotent Olu-Orun: an adura (petition or prayer) for divine support.

Prayer to one’s Ori Orun produces an immediate sensation of joy. Èṣù Elegbara initiates contact with the spiritual realm on behalf of the petitioner and transmits the prayer to Ayé; the deliverer of ase or the spark of life. He transmits this prayer without distorting it in any way. Thereafter, the petitioner may be satisfied with a personal answer. If he or she is not, the Ifá oracle of the Òrìṣà Òrúnmila may also be consulted.

All communication with Orun, whether simplistic in the form of personal prayer or complicated in the form of that done by an initiated Babalawo (priest of divination), however, is energized by invoking ase.

In the Yoruba belief system, Olodumare has ase over all that is. Hence, It is considered supreme

Olodumare (Yoruba: Olódùmarè) also known as Ọlọ́run (Almighty) is one of the manifestations of the Supreme Creator God in Yoruba religion. The name comes from the phrase “O ní odù mà rè” meaning “the owner of the source of creation that does not become empty,” “or the All-Sufficient”

The Yoruba believe that Olodumare is omnipotent and is the Source of all. Olodumare is aloof; he is not directly involved in earthly matters and lets other Orisha, who are his sons and daughters, answer human concerns through divination, possession, sacrifice, and more. However, everything is in the hands of Olodumare when they are going to bed at night.

The name Olodumare symbolizes a divine entity that has no father or mother and that simultaneously is and is not bound by space, time, and dimension.

Historically, the Yoruba worship Olodumare through the agency of the orisa; thus there is no image, shrine, or sacrifice made directly towards him. There is some controversy about whether Olodumare is directly worshiped, due to his aloofness from humanity. However, some also worship Olodumare directly. Olodumare is the origin of virtue and mortality and bestows the knowledge of things upon all persons when they are born. He is omnipotent, transcendent, unique, all-knowing, good, and evil.

The Yoruba call on Olodumare when other deities (orishas) seem unwilling or incapable to help. These orisa or orishas are supernatural beings, both good (egungun) and bad (ajogun), who represent human activity and natural forces. Yoruba believe Olodumare created all other forces of the universe to help continue the evolution of the universe.

The Yoruba religion has its own unique creation story, in which Olorun lived in the sky with the orishas, and the goddess Olokun was the ruler of all of the water below. Another being, Obatala, asked Olorun for permission to create dry land for other creatures to live upon. Obatala took a bag and filled it with a sand-filled snail shell, a white hen, a black cat, and a palm nut. He threw the bag over his shoulder and began to climb down from the heavens on a long gold chain. When he ran out of a chain, he poured the sand out beneath him and released the hen, who began pecking at the sand and began spreading it around to create the hills and valleys.

He then planted the palm nut, which grew into a tree and multiplied, and Obatala even made wine from the nuts. One day, after drinking a bit of palm wine, Obatala got bored and lonely and fashioned creatures out of clay, many of which were flawed and imperfect. In his drunken stupor, he called out to Olorun to breathe life into the figures, and thus mankind was created.

Finally, the Yoruba religion also has Ashe, a powerful life force possessed by humans and divine beings alike. Ashe is the energy found in all-natural things rain, thunder, blood, and so on. It is similar to the concept of the Chi in Asian spirituality, or that of the chakras in the Hindu belief system.

It is estimated that some 20% of Yoruba practice the traditional religion of their ancestors. In addition to honoring the creator god, Olorun, and the orishas, followers of the Yoruban religion often participate in celebrations during which sacrifices are offered to the different gods that control things like rain, sunshine, and the harvest. During Yoruba religious festivals, participants are intensely involved in the ritualistic-re-enactment of folktales, myths, and other events that help explain mankind’s place in the cosmos.

For a Yoruban to avoid participation in these ceremonies would be to essentially turn his back on his ancestors, spirits, and gods. Festivals are a time in which family life, dress, language, music, and dance are celebrated and expressed side by side with spiritual belief; it’s a time of building community and making sure that everyone has enough of what they need. A religious festival may include ceremonies to mark births, marriages, or deaths, as well as initiations and other rites of passage.

During the annual Ifa celebration, which falls at the time of the yam harvest, there is a sacrifice made to Ifa, as well as a ritualized cutting of the new yam. There is a great feast, with dancing, drumming, and other forms of music all folded into the ritual celebration. Prayers are said to ward off premature deaths and to offer protection and blessings to the entire village for the coming year.

The festival of Ogun, which also takes place on an annual basis, involves sacrifices as well. Before the ritual and celebration, priests take a vow to abstain from cursing, fighting, sex, and eating certain foods, so they can be seen as worthy of Ogun. When it’s time for the festival, they make offerings of snails, kola nuts, palm oil, pigeons, and dogs to soothe Ogun’s destructive wrath.

Yoruba religious celebrations have a social purpose; they promote cultural values and help to preserve the rich heritage of the people who follow them. Although many Yoruba people have become Christian and Muslim since colonization, those who practice the traditional religious beliefs of their ancestors have managed to coexist peacefully with their non-traditional neighbors. The Christian church has compromised by blending their annual programming into the indigenous celebrations of the harvest; while traditional Yoruba are celebrating their gods, for instance, their Christian friends and family members are offering thanks to their own God. People come together for this dual-faith celebration to offer prayer for the mercy, protection, and blessings of two very different types of deities, all for the good of the entire community.