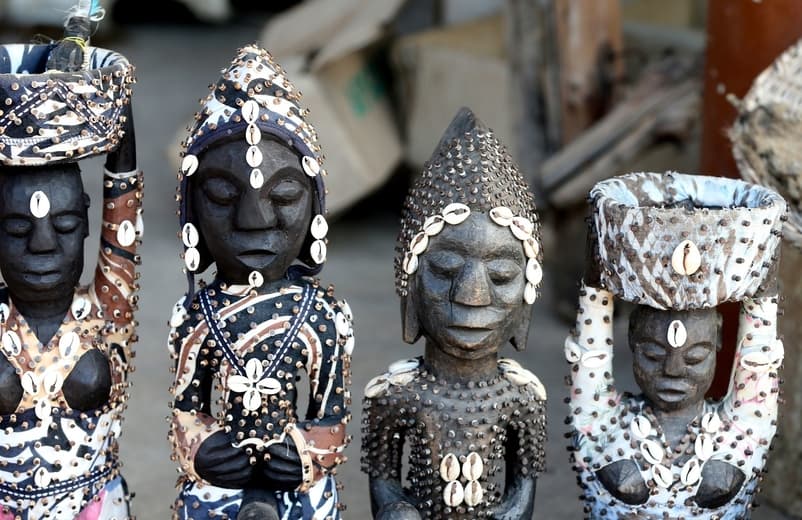 All About Voodoo Religion

Vodou also spelled Voodoo, Voudou, Vodun, or French Vaudou and Voodoo Religion is a traditional Afro-Haitian religion. Vodou represents a syncretism of the West African Vodun religion and Roman Catholicism by the descendants of the Dahomean, Kongo, Yoruba, and other ethnic groups who had been enslaved and transported to colonial Saint-Domingue (as Haiti was known then) and partly Christianized by Roman Catholic missionaries in the 16th and 17th centuries. The word Vodou means “spirit” or “deity” in the Fon language of the African kingdom of Dahomey (now Benin).

History And Meaning and Spread Of The Voodoo Religion:

Vodou developed among Afro-Haitian communities amid the Atlantic slave trade of the 16th to 19th centuries. Its structure arose from the blending of the traditional religions of those enslaved West and Central Africans, among them Yoruba, Fon, and Kongo, who had been brought to the island of Hispaniola. There, it absorbed influences from the culture of the French colonialists who controlled the colony of Saint-Domingue, most notably Roman Catholicism but also Freemasonry. Many Vodouists were involved in the Haitian Revolution of 1791 to 1804 which overthrew the French colonial government, abolished slavery, and transformed Saint-Domingue into the republic of Haiti. The Roman Catholic Church left for several decades following the Revolution, allowing Vodou to become Haiti’s dominant religion. In the 20th century, growing emigration spread Vodou abroad. The late 20th century saw growing links between Vodou and related traditions in West Africa and the Americas, such as Cuban Santería and Brazilian Candomblé, while some practitioners influenced by the Négritude movement have sought to remove Roman Catholic influences.

Many Haitians practice Vodou to some extent, although typically also practice Roman Catholicism, seeing no issue in pursuing the two different systems simultaneously. Smaller Vodouist communities exist elsewhere, especially among the Haitian diaspora in the United States. Both in Haiti and abroad Vodou has spread beyond its Afro-Haitian origins and is practiced by individuals of various ethnicities. Vodou has faced much criticism throughout its history, having repeatedly been described as one of the world’s most misunderstood religions.

Vodou does not focus on proselytizing.

Vodou is a worldview encompassing philosophy, medicine, justice, and religion. Its fundamental principle is that everything is spirit. Humans are spirits who inhabit the visible world. The unseen world is populated by lwa (spirits), mystè (mysteries), anvizib (the invisible), Zanj (angels), and the spirits of ancestors and the recently deceased. All these spirits are believed to live in a mythic land called Ginen, a cosmic “Africa.” The God of the Christian Bible is understood to be the creator of both the universe and the spirits; the spirits were made by God to help him govern humanity and the natural world.

The primary goal and activity of Voodoo Religion are to sevi lwa (“serve the spirits”)—to offer prayers and perform various devotional rites directed at God and particular spirits in return for health, protection, and favor. Spirit possession plays an important role in the Afro-Haitian religion, as it does in many other world religions.

The ritual language used in Vodou is termed langaj. Many of these terms derive from the Fon language of West Africa, including the term Vodou itself. First recorded in the 1658 Doctrina Christiana, the Fon word Vôdoun was used in the West African kingdom of Dahomey to signify a spirit or deity. In the Haitian Creole language, Voodoo Religion came to be used to describe a specific style of dance and drumming. Outsiders to the religion later adopted the term as a generic term for much of Afro-Haitian religion, with the term now encompassing “a variety of Haiti’s African-derived religious traditions and practices”.

During religious rites, believers sometimes enter a trancelike state in which the devotee may eat and drink, perform stylized dances, give supernaturally inspired advice to people, or perform medical cures or special physical feats; these acts exhibit the incarnate presence of the lwa within the entranced devotee. Vodou ritual activity (e.g., prayer, song, dance, and gesture) is aimed at refining and restoring balance and energy in relationships between people and between people and the spirits of the unseen world.
A central ritual involves practitioners drumming, singing, and dancing to encourage a lwa to possess one of their members and thus communicate with them. Offerings to the lwa include fruit, liquor, and sacrificed animals. Offerings are also given to the spirits of the dead. Several forms of divination are utilized to decipher messages from the lwa. Healing rituals and the preparation of herbal remedies and talismans also play a prominent role.

Vodou is an oral tradition practiced by extended families that inherit familial spirits, along with the necessary devotional practices, from their elders. In the cities, local hierarchies of priestesses or priests (manbo and oungan), “children of the spirits” (ounsi), and ritual drummers (ountògi) comprise more formal “societies” or “congregations” (sosyete). In these congregations, knowledge is passed on through a ritual of initiation (kanzo) in which the body becomes the site of spiritual transformation. There is some regional difference in ritual practice across Haiti, and branches of the religion include Rada, Daome, Ibo, Nago, Dereal, Manding, Petwo, and Kongo. There is no centralized hierarchy, no single leader, and no official spokesperson, but various groups sometimes attempt to create such official structures. There are also secret societies, called Bizango or Sanpwèl, that perform a religious-juridical function.
A calendar of ritual feasts, syncretized with the Roman Catholic calendar, provides the yearly rhythm of religious practice. Important lwa are celebrated on saints’ days (for example Ogou on St. James’s Day, July 25; Ezili Danto on the feast of Our Lady of Mount Carmel, July 16; Danbala on St. Patrick’s Day, March 17; and the spirits of the ancestors on All Saints’ Day and All Souls’ Day, November 1 and November 2). Many other familial feasts (for the sacred children, for the poor, for particular ancestors), as well as initiations and funerary rituals, occur throughout the year.

Individuals learn about the religion through their involvement in its rituals, either domestically or at the temple, rather than through special classes. Children learn how to take part in the religion largely from observing adults.

Various scholars describe Vodou Religion as one of the world’s most maligned and misunderstood religions. Its reputation is notorious; in broader Anglophone and Francophone society, it has been widely associated with sorcery, witchcraft, and black magic. In U.S. popular culture, for instance, Haitian Vodou is usually portrayed as destructive and malevolent, attitudes sometimes linked with anti-black racism. Non-practitioners have often depicted Vodou in literature, theater, and film; in many cases, such as the films White Zombie (1932) and London Voodoo (2004), these promote sensationalist views of the religion. The lack of any central Vodou authority has hindered efforts to combat these negative representations.

Humanity’s relationship with the lwa has been a recurring theme in Haitian art, and the Vodou pantheon was a major topic for the mid-20th century artists of the “Haitian Renaissance.” Art collectors began to take an interest in Vodou ritual paraphernalia in the late 1950s, and by the 1970s an established market for this material had emerged, with some material being commodified for sale abroad. Exhibits of Vodou ritual material have been displayed abroad; the Fowler Museum’s exhibit on “Sacred Arts of Haitian Vodou” for instance traveled the U.S. for three years in the 1990s. Vodou has appeared in Haitian literature and has also influenced Haitian music, as with the rock band Boukman Eksperyans, while theatre troupes have performed simulated Vodou Religion rituals for audiences outside Haiti. Documentaries focusing on Vodou have appeared—such as Maya Deren’s 1985 film Divine Horsemen or Anne Lescot and Laurence Magloire’s 2002 work Of Men and Gods—which have in turn encouraged some viewers to take a practical interest in the religion.