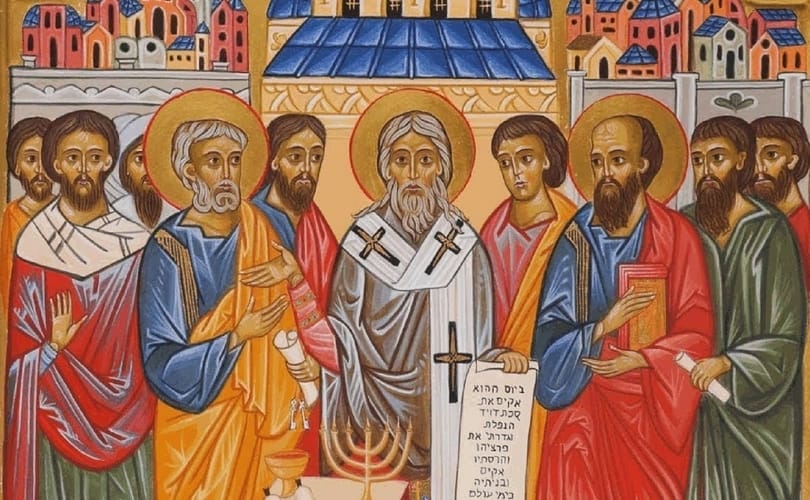 All About Dositheus OR Dositheos

Dositheus occasionally is also known as Nathanael, both meaning “gift of God”, Dositheos Was a Samaritan religious leader of Arab origins. Founder of a Samaritan sect often assumed to be Gnostic in nature. He is reputed to have known John the Baptist and been either a teacher or a rival of Simon Magus.

Dositheus lived later than Simon Magus, the first heresiarch of the Church; other authors speak of him as the teacher of Simon, at the same time confounding him with Simon Magus, connecting his name with Helena, and stating that he was the “being”. Origen says that Dositheus pretended to be the Christ (Messiah), applying Deut 18:15 to himself, and he compares him with Theudas and Judas the Galilean. Origen also says that Dositheus’ disciples pretended to possess books by him, and related concerning him that he never suffered death, but was still alive.

Some of the Dositheans lead loose lives, others preserve a rigid morality, refrain from the use of meat, observe the rite of circumcision, and are very strict in keeping the Sabbath and in observing the laws of Levitical purity.

Dositheos lived in the first century CE. According to Pseudo-Tertullian, he was the first to deny the Prophets, a heresy that gave rise to the party of the Sadducees.
The Samaritan chronicler Abu al-Fatḥ of the fourteenth century, who used reliable native sources, places the origin of the Dosithean sect in the time before Alexander the Great.

Origen says that the Dositheans were never flourishing and that in his time, they had almost entirely disappeared, scarcely thirty of them being left. The Midrash, however, speaks of Dositheans, with whom Rabbi Meir had dealings, and two names, “Dosion and Dosthion,” are also mentioned, which either refer to two Dosithean sectarians or form a double designation for the heretic Dositheus.

Yet the fact that the patriarch Eulogius of Alexandria (who probably lived 582–603) disputed successfully against the Samaritan followers of Dostan (Δοσϑήν) or Dositheus, and wrote a work expressly against them (Photius, “Bibliotheca,” cod. 230), shows that the Dositheans existed and even exercised a certain power in the sixth century.

Origen possibly refers to a Christian sect of the Dositheans, who left no traces, while the Samaritan sect certainly continued to exist. In Egypt especially, the sect was probably numerous enough to induce the Christian patriarch of Alexandria to engage in polemics against it.

The Pseudo-Clementine Recognitions and Homilies tells how Dositheos, by spreading a false report of Simon Magus’ death, succeeded in installing himself as head of his sect. Simon on coming back thought it better to dissemble, and, pretending friendship for Dositheus, accepted the second place. Soon, however, he began to hint to the thirty that Dositheus was not as well acquainted as he might be with the doctrines of the school.

Dositheos History according To Arabic sources:

In Egypt, the Arabic writers may have become acquainted with the Dositheans, though some may have survived also in Syria and Palestine, as is evident from the rabbinical sources. Al-Masudi, of the tenth century, says that the Samaritans were divided into two sects, that of the Kushan, or ordinary Samaritans (=”Kuthim”), and that of the Dostan (Dositheans; compare Δοσϑήν).

Al-Shahrastani calls them “Kusaniyyah” and “Dusitaniyyah.” Abu al-Fatḥ says of the Dostan, the Samaritan Dositheans, that they abolished the festivals instituted by the Mosaic law, as well as the astronomical tables, counting thirty days in every month, without variation.

The determination of the months through the testimony of witnesses may also have been a Karaite custom although that practice may go back to a time before the opposite view of the Pharisees existed.

Under the Abbasid khalifs, the Samaritans persecuted the Dositheans, although they themselves had to suffer much. Under Ibrahim (218–227 of the Hegira) the synagogue of the Samaritans and Dositheans at Nablus was burned by heretics, but it was subsequently rebuilt. Yusuf ibn Dasi, governor of Palestine, entirely forbade the worship of the Dositheans; and the sect may in consequence have been absorbed by the Samaritans.