Judaism religion is an ethnic religion comprising the collective religious, cultural, and legal traditions and civilization of the Jewish people. Judaism is considered by religious Jews to be the expression of the covenant that God established with the Children of Israel.

Jews or Jewish people are an ethnoreligious group and a nation, originating from the Israelites and Hebrews of historical Israel and Judah.

Judaism is the name of the religion, and its followers are known as Jews. It is the world’s oldest monotheistic religion, Judaism began around 4,000 years ago when the Prophet Abraham received a vision from God. Jews believe that there is only one God, who revealed himself through ancient prophets. with whom they have a special agreement called a covenant.
The history of Judaism is essential to understanding the Jewish faith, which has a rich heritage of law, culture, and tradition.

The three main beliefs at the center of Judaism are Monotheism, Identity, and covenant (an agreement between God and his people).

The most important teachings of Judaism is that there is one God, who wants people to do what is just and compassionate.
Also, God who not only created the universe but with whom every Jew can have an individual and personal relationship. They believe that God continues to work in the world, affecting everything that people do. The Jewish relationship with God is a covenant relationship.

And here a summary of what Jews believe about God

In Judaism, Yahweh, the god of the Israelites, whose name was revealed to Moses as four Hebrew consonants (YHWH) called the tetragrammaton.
God has been conceived in a variety of ways. Traditionally, Judaism holds that YHWH, the God of Abraham, Isaac, and Jacob and the national god of the Israelites, delivered the Israelites from slavery in Egypt, and gave them the Law of Moses at biblical Mount Sinai as described in the Torah.

The Hebrew Scriptures referred to by Christians as the Old Testament, are called the TANAKH, which is the Hebrew acronym for the three different parts:

The Torah which is the first five books of the Old Testament or the Pentateuch;
The Nevi’im which are the books of the prophets.
Ketuvim is the remaining writings.

Torah. The Jewish sacred text is called the Tanakh or the “Hebrew Bible.” It includes the same books as the Old Testament in the Christian Bible, but they’re placed in a slightly different order.
The Talmud holds that the Torah was written by Moses, with the exception of the last eight verses of Deuteronomy, describing his death and burial, being written by Joshua. Alternatively, Rashi quotes from the Talmud, “God spoke them, and Moses wrote them with tears”.

Star of David, Hebrew Magen David (“Shield of David”), Magen also spelled Mogen, Jewish symbol composed of two overlaid equilateral triangles that form a six-pointed star. It appears on synagogues, Jewish tombstones, and the flag of the State of Israel.

The Hebrew word for ‘symbol’ is ot, which, in early Judaism, denoted not only a sign but also a visible religious token of the relation between God and humans. 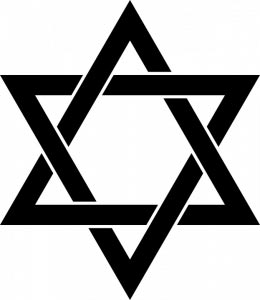 The synagogue is the Jewish place of worship but is also used as a place to study, and often as a community center as well. Orthodox Jews often use the Yiddish word shul (pronounced shool) to refer to their synagogue. In the USA, synagogues are often called temples.

Jews vary dramatically in their approach to Jewish traditions, laws, and ritual observance. In the United States, the major religious streams of Judaism are Reform, Conservative, Orthodox, and Reconstructionist. The Orthodox population is itself quite diverse, with numerous subgroups, such as ultra-Orthodox or Haredi Orthodox (a group that includes Hasidic Jews), centrist Orthodox and Modern Orthodox. Many Jews do not identify with anyone denomination, instead of describing themselves as “nondenominational,” “trans-denominational,” “post-denominational” or “just Jewish.”