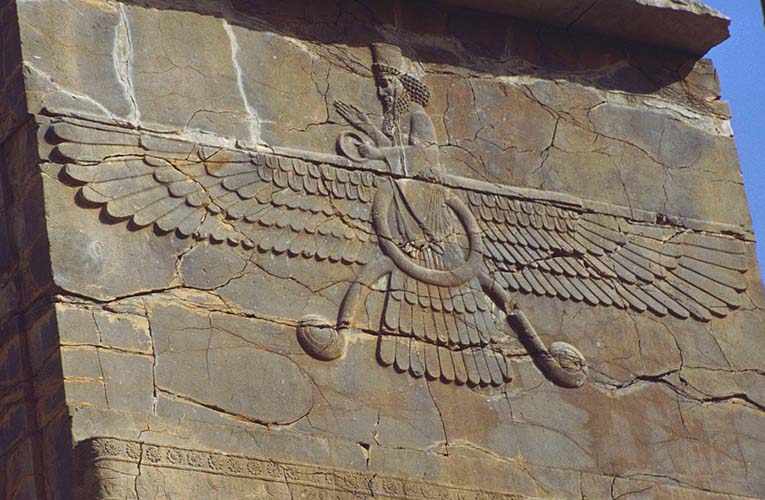 Everything about god in Zoroastrianism

When talking about the Zoroastrianism god, we can only speak about Ahura Mazda that is the creator and highest deity of Zoroastrianism.

Zoroastrianism god is one God

He is compassionate, just, and is the creator of the universe.

Ahura Mazda is a Zoroastrianism god and is the creator of the universe and all the things in it, being at the same time-wise and good.

Who is Ahura Mazda?

According to Zarathustra, Ahura Mazdā created the universe and the cosmic order that he maintains. He created the twin spirits Spenta Mainyu and Angra Mainyu (Ahriman) the former beneficent, choosing truth, life, and light; and the latter destructive, choosing deceit, death, and darkness.

The struggle of the spirits against each other makes up the history of the world and is reflected in the choice between good and evil that humanity constantly faces.

In Zoroastrianism, as reflected in the Avesta, Ahura Mazdā is identified with Spenta Mainyu and is directly opposed to Angra Mainyu. Ahura Mazdā is all-wise, bounteous, undeceiving, and the creator of everything good.

The beneficent and evil spirits are conceived as mutually limiting, coeternal beings, the one above and the other beneath, with the world in between as their battleground.

In late sources (3rd century CE onward), Zurvān (“Time”) is made the father of the twins Ormazd and Ahriman, who reign alternately over the world until Ormazd’s ultimate victory.

God is worshiped as supreme

Zoroastrians believe that everything he created is pure and should be treated with love and respect. This includes the natural environment, so Zoroastrians traditionally do not pollute the rivers, land, or atmosphere.
This has caused some to call Zoroastrianism ‘the first ecological religion’.

In Zoroastrianism, Ahura Mazda has an adversary called Angra Mainyu (meaning ‘destructive spirit’). Angra Mainyu is the originator of death and all that is evil in the world.

Ahura Mazda, who is perfect, abides in Heaven, whereas Angra Mainyu dwells in the depths of Hell. When a person dies they will go to Heaven or Hell depending on their deeds during their lifetime.

It is generally accepted that in the Abrahamic religions, the concepts of Heaven and Hell, as well as the Devil, were heavily influenced by Zoroastrian belief.

The prophet and God

Zoroastrians believe that Zoroaster is the prophet of God. Zoroaster himself is not worshipped, but through his teachings, man can become close to God by following the path of truth and righteousness (Asha).

3 thoughts on “Zoroastrianism god | All about god in Zoroastrian”